Life is a bowl of cherries.... 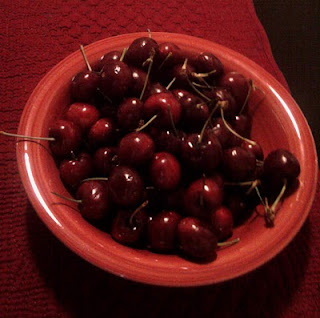 Happy New Year!!!
Woke up quiet. Lots of hugs and kisses showered my children who were sleeping like angels. We had THE BEST new year's eve ever! Hanging out with my best friend, his wife and kids was awesome! They stayed the night and the kids played and played until they passed out. The kids watched movies on the ceiling, built Legos, ROCKED OUT, played Wii, ran around the house playing hide and go seek, let their imaginations soar and just had good ol fashioned FUN!!! The four adults joined in all the reindeer games! When Wave got up in the morning he said, "I didn't know we were having a slumber party!" smile
We had a blast! With plenty to feast on and drink, no one had a care in the world and the time flew by. It was four in the afternoon New Year's eve when things started to wind down. Marz and his family had to get back on the road and make the exodus back to New York to get ready to bring in the New Year. The back roads got them home in record time. smile
THAT IS WHAT IT IS ALL ABOUT....FAMILY! Instead of going to a party this year Stacy, the kids and I went to my Mommy's house to spend quality time together. We then went home and brought in the new year snuggled up saying "I love you" until the clock struck 12. So as I bring in the new year ready for my new journey of "the Year of Silence" the last words spoken in 2010 were "I love you" into the ears of my husband and children. Life truly is a bowl of cherries! smile
Posted by Justice - Artpeace Studio at 9:47 AM