Who left the ironing board out? 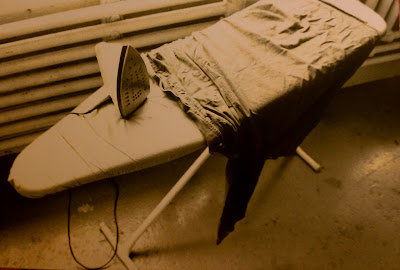 Have you ever been over someones house and it looks like a tornado just flew through? And we're not talking about a mess that is made from general living and the person just hasn't gotten around to doing the chores. This mess I'm speaking of could easily be highlighted on the next episode of  "Hoarders"! Things everywhere...bulging boxes stacked atop one another; bags full of 'needful' things strewn about; mountains of clothes pile high creating an obstacle course the envy of even a Tough Mudder competition. Every conceivable surface has something on it. Standing still is your best option because the thought of navigation breaks you out in a cold sweat.

Now the chaos is not isolated to things. There could be a gang of unkempt kids tussling about oblivious to their third world conditions. They are busy screaming about who touched who as if personal space is a holy sanctum. Let's throw in a few pets for good measure creating the look of the food chain: a couple mange dogs fighting over a sock, a fat cat lounging on top of the fridge, an unknown number of hamsters in a habitat that looks and smells like a trash heap, a lone goldfish in a bowl where the water has evaporated so much he can barely swim about, and who could do without some sort of reptile? An iguana, tucked away in a corner with a heat lamp warming his sanctuary protected from the clutter by a thin layer of glass. (I think a bird would be over the top...don't you?)

Then there is the noise! Why is the TV and Pandora blaring? Sounds are rising and falling in fierce competition so that the alpha can be heard. Suddenly above everything, the head of the house, clearly the one responsible for establishing this environment yells out in an authoritarian query of control,
"WHO LEFT THE IRONING BOARD OUT?!!!"

This applies to how some people think and react in confrontation. Avoiding the obvious. Instead zeroing in on a fatal flaw of yours. A passage from the bible describes it well.
Matthew 7:3-5
"Why do you look at the speck of sawdust in your brother's eye and pay no attention to the plank in your own eye? How can you say to your brother, 'Let me take the speck out of your eye,' when all the time there is a plank in your own eye? You hypocrite, first take the plank out of your own eye, and then you will see clearly to remove the speck from your brother's eye."

Let us be mindful to keep our own affairs in order before we are quick to point out another person's shortcomings. Then we will have the clarity to help one another.
Posted by Justice - Artpeace Studio at 6:31 AM